"Intel has announced a new family of SSD hardware aimed at business deployments with support for 256-bit AES encryption, the Trusted Computing Group's Opal management specification, and support for the vPro features inside Haswell. This last is a bit inaccuracy -- while the new drives do apparently support some vPro capabilities for remote management, Haswell didn't actually include any new features for vPro that Ivy Bridge doesn't support. Haswell's vPro implementation is supposed to be faster in certain circumstances, however.

With this new family, Intel is talking up Trusted Computing and remote management capabilities, and emphasizing the fact that these products are designed to hit ultra-low power consumption targets and failure rates below 1% per year. Actual drive performance is typical for SATA 6G products, with sequential read/write speeds up to 540MB/s and 490MB/s for the new hardware. Power consumption in what Intel calls DevSleep is 5 milliwatts, with power consumption in DevSleep mode as low as 200 microwatts (0.2 milliwatts).

DevSleep, if you haven't heard of it before, is a new power-saving mode that's supported on Haswell chipsets. The goal is to further lower SSD power consumption while enabling smartphone style instant-on operation. Bringing power consumption down as low as 0.2mW in idle will help prevent the stealth battery drain that kicks in when a system is left in sleep mode for significant periods of time.  " 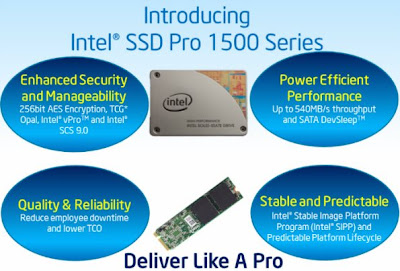