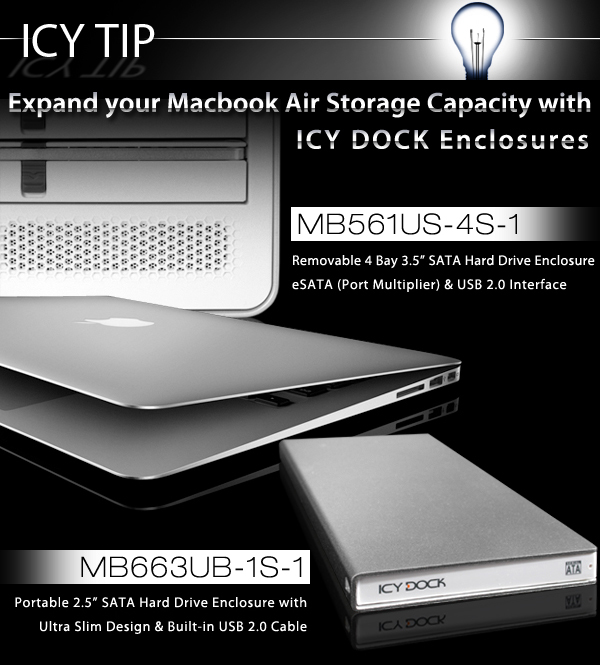 With Apple leading the way in making laptops smaller, thinner, lighter, and more powerful the world of laptop manufactures now must keep up with them. Apple's new Mac Book Air is evidence of Apple's advances in laptop technology as well as keeping the new power sleek and thin. The new Mac Book Air has a very thin body of only 0.68" with the laptop closed. The Air besides being one of the thinnest laptops on the market it also has some other features that no other laptop has. The built in Solid State Drive or SSD has not only replaced the normal hard drive but has also been imbedded into the mother board for even more space reduction. The SSD has very fast read/write speed opposed to the traditional hard drive. It can allow the laptop to start up almost instantly. What the SSD makes up for in speed, performance, and durability it lacks in storage capacity. With only three models being released of only 64Gb, 126Gb, or 256Gb it can be a problem when you need to store your big picture files or video files or what ever else you may need to store that would fill up your precious SSD capacity.

If you need something more than just a portable hard drive enclosure then the MB561US-4S-1 is the perfect solution for you. The MB561US-4S-1 will allow any Mac weather it be your new Mac Book Air or your home iMac or Mac Pro this will be your ultimate storage system. The MB561US-4S-1 has the capability of holding up to 8Tb of data. The unit has four trays to house up to 2Tb drives each. The MB561US-4S-1 has two different interfaces to choose from. Each can be used for different applications for your specific needs. If you have a Mac Pro with a port multiplier card you can use the eSATA interface to see each individual drive. If you are using your Mac Book Air you can use the USB interface to see each drive individually. The unit features a back fan to keep the entire unit cool. You also have the option of controlling the fan speed easily on the back of the unit. Installing the drives into the unit is easily done using the included screws. In each tray, four screws hold the hard drives securely to the units hard drive trays. With the hard drives installed on the trays you can take advantage of the Hot Swap features on the MB561US-4S-1. You can remove and replaces hard drives as you please with the system running without a hitch. Following along the same stylistic lines of Apples products the MB561US-4S-1 looks good as well as works good. The case on the unit is made from sturdy aluminum which keeps the unit rugged to protect your hard drives with in. The MB561US-4S-1 has a 3 year warranty backing this quality unit. If you need to share the data on the MB561US-4S-1 with your entire network do not worry, it can adapt to your Apple Airport extreme, Time capsule, Router and wireless NAS storage so any system on the same network can share its data.

Further information on connecting your MB561US-4S-1 to a network can be found HERE.

ICY TIP: Still not convinced to buy an SSD? Build a drive that exceeds the WD VelociRaptor in capacity, performance, and value By using two SATA HDD in RAID 0 with the MB982SPR-2S 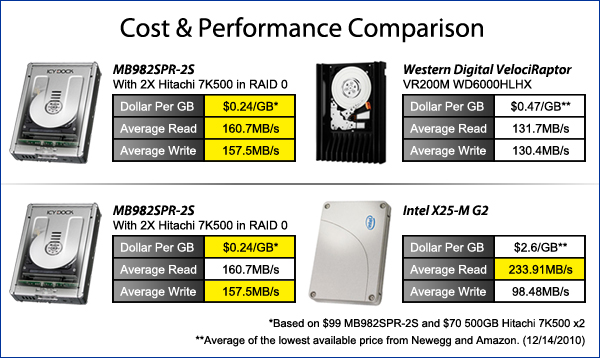 One major complaint for going the SSD route is that you have to pick and choose your data carefully, due to limited storage capacity. This means that you will likely store your operating system files, and maybe a game or piece of software on the drive, and that is it. The obvious answer is to simply get a bigger SSD, however the current price point for SSDs is almost $2.00 per GB. So to get a drive the same size as a standard HDD in a desktop, you are looking at almost $500! The next fastest type of drive would be the Western Digital VelociRaptor, able to achieve average read and write speeds of about 120-130 MB/second, but they face a similar problem; their price is too high, and that forces the user to sacrifice space for speed.

But what if you could have both blazing fast read and write speeds, and the storage capacity of a regular HDD? What if there was a way of obtaining speeds faster than a Western Digital VelociRaptor, had more capacity, and it was cheaper?

These important questions are answered with the Icy Dock MB982SPR-2S, which can take two 2.5" SATA HDDs, and fit them into the space of a single 3.5" SATA HDD. Most importantly, the device include hardware RAID to allow the user to place the drives in BIG, RAID 1, or RAID 0, yielding different performance and functionality. One could take two 2.5" SATA HDD, such as the Hitachi TravelStar 500GB 7200RPM drives, place them in the MB982SPR-2S and create a RAID 0 array. The result will be a 3.5" form factor drive with a 1TB capacity, and average read & write speeds of about 160MB/second! (See HD Tune benchmark results below). 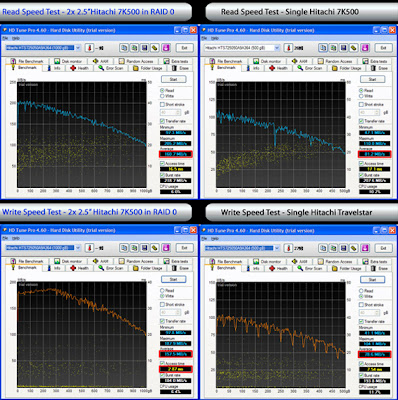 
Now you have 25% increases in your transfer rates and a massive storage capacity to store ALL of your programs and files, rather than having to pick and choose and maintain multiple drives.

This is a phenomenal set up for gamers, audio engineers, video editors, and even an IT professional looking to maximize their network speeds for a small business.

The prices of solid state drives are decreasing slowly, which means they are becoming more widely available for the average consumer, rather than being reserved for power and enterprise users. Even with this new wave of major system upgrades, users are still trying to tap into the potential that SSDs have to offer, and do so using the same tools they know and love such as RAID arrays and hot swap drive bays.
This is where the Icy Dock MB982SPR-2S Dual Bay SSD RAID Converter stands alone, offering unique abilities through a practical design and cutting edge technologies. The MB982SPR-2S allows a user to insert 2 x 2.5" SATA SSDs into a enclosure that fits the exact form factor of a 3.5" SATA hard disk drive. This means that it fits anywhere a 3.5" drive can fit, including hot swap mobile racks, and standard internal drive bays. Best of all, it doesn't require a single tool or screw to install the drives. And it does all of this while giving the user the ability to set up a RAID array such as RAID 0 or RAID 1, and making it so that it is not dependent on an external RAID card or a motherboard.
Since Icy Dock is the top name in SSD converters, it was a natural step to create a product that can take SSDs to a whole new level. The MB982SPR-2S takes various technologies that have been perfected by Icy Dock, and integrates them into the ultimate SSD add-on component, which can be used with any Windows system, as well as the Mac Pro desktop. The biggest feature of the device is that it crams 2 high performance SATA drives into the same space as a single 3.5" drive, and does so in a tool-less fashion. Once in the enclosure, the converter fits right into your PC tower, Mac Pro, or mobile rack. Here are some top computer cases that will gladly hold your MB982SPR-2S:
1. Antec Nine Hundred ATX Mid Tower
2. Cooler Master Centurion 5 ATX Mid Tower
3. Thermaltake Armor Plus ATX Full Tower
4. NZXT Apollo ATX Mid Tower
5. Corsaid Obsidian Series ATX Full Tower
Once inside the Windows or Mac desktop, the user can utilize provided software for both platforms to set up a RAID array. Putting the drives into RAID 0 increases drive performance, and doubles the storage capacity, and using a pair of Intel X25-M 80GB SSDs, the MB982SPR-2S achieved read speeds of 253.3 MB/sec, and write speeds around 134.3 MB/second; read speeds maxed out the SATA II limitation, and write speeds increased by almost 75%! When not in RAID, each drive had read speeds of 240.7 MB/sec and write speeds of 82.2 MB/sec. On the other side of the spectrum, using a RAID 1 array mirrors the two drives together for maximum protection against drive failure. So if 1 drive fails, you can keep working uninterrupted since the backup drive is an exact clone of the other. Then, when work can be paused, the replacement drive can be inserted and automatic rebuilding can begin, at which point you can start working again. In either case, because the RAID array is created and maintained by the enclosure, your high performance volume is now mobile, and can be transferred from system to system; it also leaves your RAID volume unaffected by situations such as a motherboard replacement or BIOS update.

Alongside the Intel X25-M 80GB SSD, here are some other blazing fast drives that will yield astounding increases in performance:

Whether you are a media professional looking to boost your system for video rendering or audio editing, or you are a hardcore gamer looking to avoid loading times, the MB982SPR-2S will take your computing experience to the next level of power.